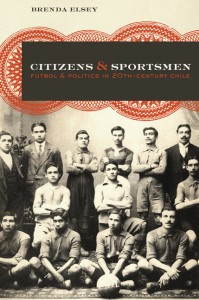 In a vibrant opening to the 2011-12 FSF season, we discussed Brenda Elsey’s book Citizens and Sportsmen.  Brenda made FSF history by being the first author to visit Michigan State University in person, for which she received a stylish FSF t-shirt and a dinner in her honor! Situating her study in the context of Latin American historiography’s concerns with the question of how democratic Chile was before the 1973 coup, Elsey uses football to convincingly argue that the country was strongly democratic before Pinochet’s rise to power.  The group explored topics such as sources and methodology; gender, class and race; the 1962 World Cup; football clubs as conduits for political mobilization; and the secularization of public space. The participants were: Alon Raab, Chris Gaffney, David Kilpatrick, Ingrid Bolivar, Brenda Elsey, Alex Galarza, and Peter Alegi. Unfortunately, the audio from the session is flawed, but is nevertheless available for listening here.

On Thursday (9/22), Brenda gave a campus talk introducing her book on Chilean football and politics. The next day she attended a grad seminar where we discussed her article from the Journal of Social History, “The Independent Republic of Football: The Politics of Neighborhood Clubs in Santiago, Chile, 1948-1960.

Our next session on Wednesday, November 9th will focus on football in the classroom. Peter Alegi, Tom McCabe, Steven Apostolov, and Alon Raab will lead the discussion. This will be an excellent opportunity to exchange syllabi, sources, reading lists, and teaching perspectives. Our discussion will not necessarily center on soccer-specific courses; if you would like to include a unit/section/lecture on soccer in your humanities or social science course, be sure to join the discussion.