An impromptu FSF session took place on June 4 to discuss the impact and aftermath of Sepp Blatter’s announcement of his impending resignation as president of FIFA just four days after being reelected to a fifth term.

What are fútbologists saying and thinking about in relation to Blatter and the larger FIFA bribery and corruption scandal? Discussion topics ranged from institutional reform, global media coverage, and the role of Africa, Asia, and the Caribbean in the crisis to what may (or may not) happen at the world body in the coming months. 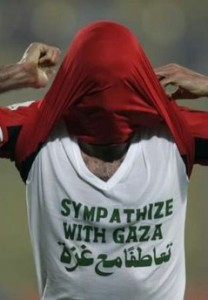 On November 14, football in the Middle East took center stage at FSF. The conversation focused on a special issue of the journal Soccer and Society, edited by Alon Raab and Issam Khalidi. It began by noting that while football has been a critical force in broader political and cultural developments in the region, there is little institutional support for studying the game in the Middle East.

The ensuing 90-minute discussion demonstrated the value of qualitative scholarly work on football.  The group explored a dizzying number of topics and territories, including football as a source of unity and hope and as a site of political and ideological conflict; the 2022 World Cup in Qatar; soccerpolitics in Turkey; sport and Islamism; Palestinian and Iraqi Kurdish women’s teams; and football films and poetry.