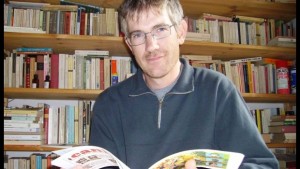 Both of the fascinating blogs so far (by Simon Kuper and Peter Alegi) have discussed the differences between sports writing from an academic and a journalistic perspective. I work as an academic but I also write “as a journalist,” so perhaps I can offer a contribution which crosses across these professions. Simon wrote about his academic family. Well, I come from the opposite background. My father, mother and great-uncle were all journalists, and my brother is a journalist now. I grew up surrounded by newsprint and hacks and to the sound of a typewriter and the panic of deadlines. I would often go into the huge Daily Mirror building in the centre of London (tragically now demolished) to meet my dad for lunch. I remember seeing the papers roll off the presses in the basement of the building, and all the printers having huge breakfasts in the cafe. I wanted to be a journalist but things took a different term and I ended up spending a lot of my life—very happily—in libraries.

Now, I think journalists are largely responsible for the revolution in football (and to some extent sports) writing over the last twenty years or so. I was inspired by Pete Davis, Simon Kuper, David Winner and Alex Bellos and others when I wrote my book Calcio: A History of Italian Football. I think there are some fascinating trends in footbology (as Peter calls it) at the moment outside of academia – the brilliant Futbologia project in Bologna, for example, which involves writers and others, and is an attempt to talk seriously about football—but also to enjoy the funny and often grotesque side of the game and its superstructures.

As Simon rightly says, journalists are skilled at making academics’ ideas and research readable and available to a wide public (although he is being far too modest about his own work here, of course). This is what makes Soccernomics work so well – it is serious research but made accessible and adapted. Put simply, journalists cut through the crap and the jargon and the absurd long sentences which so many academics love to use and can’t seem to get away from. David Goldblatt’s seminal The Ball is Round is an exception to this rule.

Beyond this, however, I would like to look a bit more critically at my own world – which we can loosely call academia. Firstly, there is still considerable resistance within the academy to research and writing on sport. Time and again, when I am introduced at a conference, people will laugh when my books on football and cycling are mentioned. It is as if football is still seen as a side-show, a bit of fun, a diversion from the real world and real research. So many histories of contemporary Italy, for example, fail to mention sport altogether. Or, if they do, there is a perfunctory reference to Gino Bartali or to World Cup victories. It is still incredibly rare for ‘serious’ academics to actually carry out research into sport. This is, quite simply, an absurdity – a massive historical and social error. How can you understand fascism without understanding its use of sport? How can you analyse post-war Italy without reference to the 1949 Superga disaster, Juventus-Fiat, Berlusconi’s Milan, Fausto Coppi or Ferrari? The calciopoli scandal tells us more about how Italy works than a thousand political corruption cases. The most watched programme in Italian history was the 1982 world cup final. How many people remember were they were that day? Everyone. Who are the uncontroversial national heroes of post-war Italy? Paolo Rossi and Sandro Pertini, both present (in different ways) in 1982. But still little changes. Sport is marginalised and sniggered at. It is time for this to change. Let’s hope a conference like this has an impact.

As C. L. R. James once wrote, in Beyond a Boundary, the best book ever written (not just the best book ever written on sport): the great historians of liberal England “never once mention the man who was the best-known Englishman of his time. I can no longer accept the system of values which could not find in these books a place for W.G. Grace.” Well. I can no longer “accept a system” which simply ignores, or pays lip-service to, the centrality of sport; the way it moves peoples emotions, the way it creates tribes and groupings, the universal languages it uses, its hyper-powerful global reach.

The other problem is simply about trying to write well, clearly and for an audience beyond the specialist one. It is not just a matter of academics not being able to write well. No. It’s much worse than that. Many academics revel in obscurity. The system encourages it. The more obscure the better. If something is popular, if you sell books, you are frowned upon. You are seen as unserious, as “dumbing down” in some way. This snob-culture is everywhere in academia, despite “impact.” Selling books is seen as a bad thing, in itself! The same goes for disciplines. Academics are usually anxious to build boundaries—”

Finally, there is the question, which Peter raises, of plagiarism—of the theft of ideas and research. This problem is on the increase, and I think this increase is partly to do with the rise of new sports writing, as well as what Simon Kuper described as the death of the match report. Readers now all know what has happened in the match. They demand more, these days—history, background, stories. These pieces require research, but few people have the time to do this research. Far too much is being written (usually for free) in far too short a time. What happens is that some journalists go to their bookshelves and pick out some of the juicy quotes and ideas from their books. Say, for example, that you were writing a piece for a magazine about the Lazio team of the 1970s. Let’s say, for example, that the piece in question was almost entirely based on the book Calcio. You haven’t actually copied anything (apart from other people’s quotes, which are also part of the author’s research) but the entire edifice of the article is taken from that book—which cost the author years of work in dusty libraries. Do you even cite that book? No. Not even once. And yet you, the journalist, were paid for that piece. This is wrong, but it happens almost on a daily basis.

Finally, we have had the explosion of social media. Now, I love Twitter. In fact, you could say that I am addicted to it. However, I can see its limitations. It encourages (and almost exalts) short-termism, stupidity and under-researched writing (and comments). Last week someone rejected my considered opinion on Arsene Wenger with a tweet which read “the cunt lives in Italy.” Delightful. But there is simply too much stuff—even when it is good. Every day there are numerous excellent articles about my own little niche world: Italian football. Who can possibly read them all? Enough, already. This is unsustainable. We need a moratorium on articles and more quality control. Stop writing. Get down to the library. That’s my motto.

Peter Alegi: This is my video blog contribution to the Football Scholars Forum roundtable taking place on Saturday, April 12, 2014, at the global fútbological conclave known as the Soccer as the Beautiful Game conference at Hofstra University. Comments welcome! 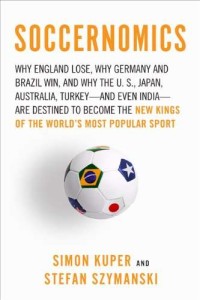 Soccernomics has been called “the Barcelona of football books” and the “Moneyball of soccer.” On Tuesday, April 16, FSF discussed this influential book with the authors: Stefan Szymanski (in East Lansing) and Simon Kuper (via Skype).

One of the most important questions asked was: How does the introduction of big data and “soccer analytics” change our understanding of fútbol clubs, fans, and nations? The forum also featured intriguing comparisons between Western Europe and the United States.

On Tuesday, April 16, at 2pm Eastern Time (11am Pacific, 7pm GMT), FSF will meet to discuss Soccernomics by Stefan Szymanski and Simon Kuper.

Combining an economist’s brain with a sports writer’s skill, the book applies serious data analysis to everyday soccer topics, revealing counterintuitive truths about the professional game and offering a potentially revolutionary way of looking at fútbol.

Stefan Szymanski will join us here in East Lansing for the session. He is the Stephen J. Galetti Professor of Sport Management at the University of Michigan. He started researching the economics of professional football in 1989, and has since come to spend his entire time researching the economics and business of sport. He has published extensively on sports related subjects, acted as a consultant to sport governing bodies and national governments, and appeared in court as an expert witness on the economics of sport. Szymanski is a founding partner, with Simon Kuper and Ben Lyttleton, of the Soccernomics consultancy.

Members who would like to participate in the online Skype discussion should contact Alex Galarza (galarza [dot] alex [at] gmail [dot] com) with your Skype name as he will be running the show.