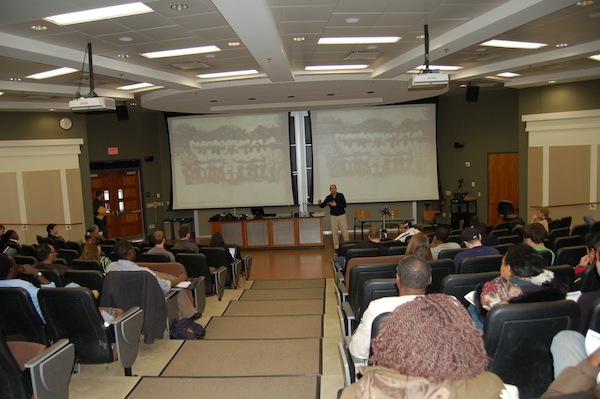 “Football/Fútbol/Soccer in the Classroom” drew 17 people, a new record for FSF! It was an extremely productive and fulfilling session.  Peter Alegi, Tom McCabe, Steven Apostolov, Sean Jacobs, Alon Raab, and David Kilpatrick kicked off with brief comments on each of their soccer courses. A vigorous and wide ranging discussion ensued.

Among the many questions and issues tackled by the collective, were the following: how can we integrate technical and tactical aspects of the game into broader intellectual analysis? Given the huge canvas of “global soccer,” how have instructors dealt with thematic, geographic, and chronological coverage? Which films and popular literary works have worked well and why? What is the state of “football archives”?

Several individuals spoke of the importance of knowing your audiences and valuing diversity.  Other participants commented on the challenges and rewards of being the first to teach sport-focused courses in their departments and institutions.  After nearly two hours, the session ended with Alon reminding us of what Swami Yogananda once said: “You will be closer to Heaven through football than by the Gita.”

Audio of the session is available here.