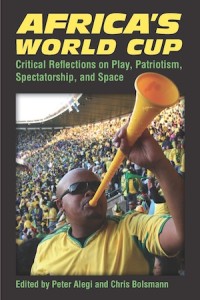 With the editors and several chapter authors in attendance, the group considered the book’s attempt at blending scholarly and journalistic approaches, as well as the process of writing, editing, and publication. A fruitful comparison between South Africa 2010 and Brazil 2014 put the spotlight on how the FIFA World Cup is entangled in a web of national and international politics, economics, and culture. There was also a fair share of debate over Luis Suarez’s handball (against Ghana) and the contradictory legacies of this “African” World Cup.

The audio recording of the discussion is available here.