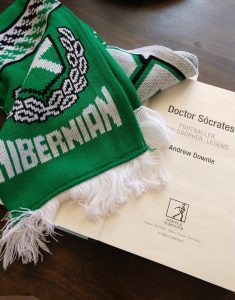 On Friday, March 23, FSF held its second session of 2018. Andrew Downie, author of Doctor Socrates: Footballer, Philosopher, Legend joined the group to discuss his 2017 biography of the Brazilian. Chris Gaffney, a longtime FSF member whose book Temples of the Earthbound Gods was the subject of a 2010 FSF session, stepped seamlessly into a moderator role for Andrew’s book.

Andrew opened his comments on his book by citing his longtime Hibs fandom and experiences working with Sócrates’ unpublished memoirs. That manuscript, alongside Andrew’s research and interviews, was a central pillar of the group discussion. Our conversation also touched on Sócrates’ personal life, his legacy, contemporary soccer politics in Brazil, and the book’s reception amongst an English-speaking audience.

During the conversation, Andrew mentioned a book recently published by Sócrates’ widow and the footballer’s collection of columns for Carta Capital magazine.