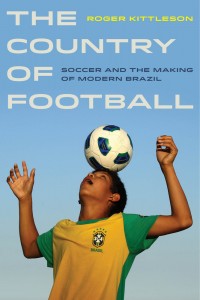 With the 2014 World Cup circus come and gone, and students beckoning, it’s time to announce the fall schedule for the 2014-15 season of the Football Scholars Forum.

Our first session picks up where Germany left off, in Brazil! On September 25, 3pm Eastern Time (-5 GMT), historian Roger Kittleson (@rogerkittleson) joins us to discuss his new book The Country of Football: Soccer and the Making of Modern Brazil.

To participate in the 90-minute Skype session, please send Alex Galarza (galarza.alex AT gmail.com) your Skype name (if Alex doesn’t already have it) so you can be added to the call.

In our second event, on October 30 (time TBD), we are pleased to welcome the “Indiana Jones of soccer journalism” (Grant Wahl’s words): James Montague (@JamesPiotr), author of Thirty-One-Nil: On the Road With Football’s Outsiders: A World Cup Odyssey.

The third session will consist of a roundtable on the state of women’s football internationally. It will take place during the week of December 9-11, just after the 2015 Women’s World Cup draw (on Dec. 6). Jean Williams (@JeanMWilliams), Martha Saavedra (@tricontinental), Gwendolyn Oxenham, and Brenda Elsey (@politicultura) are among the confirmed participants who will pre-circulate blog posts on this website to spark discussion and stimulate debate.
The schedule for spring 2015 is also coming along nicely. More news on that front as it becomes available. See you on the pitch!