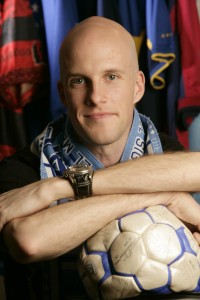 Grant Wahl writes for Sports Illustrated and is the author of The Beckham Experiment, the first soccer book ever to become a New York Times bestseller.

In the spring of 1995, during my junior year at Princeton, I met with the head of the politics department to pitch an idea for my senior thesis. I wanted to spend three months in Buenos Aires studying the political culture of soccer clubs. It seemed like a worthwhile topic. In a still-young democracy like Argentina, the nation’s soccer clubs had been a thriving part of civil society for decades. With memberships ranging from the hundreds to the hundreds of thousands, the clubs often had multiple political parties (agrupaciones) and election campaigns that received more attention in the media than governmental elections. What’s more, the function of soccer clubs in civil society had barely been explored by academics at the time. In Making Democracy Work, a classic study of Italy’s political culture, the Harvard professor Robert Putnam had mentioned the nation’s hundreds of soccer clubs before dismissing them in a single sentence, never to return to the topic again.

It was though the academics I encountered viewed anything sports-related as somehow not worth their attention. And, sure enough, the meeting with my university professor—a somewhat fossilized character named Paul Sigmund, the department’s main Latin American expert—did not go well. He called my thesis project “a silly idea,” dismissing it in a single sentence.

Fortunately, I met with another professor who did like the idea. His name was Carlos Forment, and it only took him a matter of minutes to volunteer to be my thesis advisor. We discussed the topics I might research, and I made plans to live in Argentina from June to late August that year. Forment always wanted to go big on projects—this is a guy who titled his own book Democracy in Latin America—and he had some great ideas. Spend a lot of time in the archive of Clarín, the big Buenos Aires daily, he suggested, and you’ll find a trove of material on the history of the soccer clubs. (And so I did, piecing together a chronicle of associational life in Buenos Aires.) Visit a smaller club, he added, to understand how the membership works together. (And so I did, interviewing people at Banfield and conducting a survey at their club elections to find out if the club’s political parties diverged from governmental party divisions. It turned out they did, which was a good sign.) Finally, interview the members and leaders at a big club like Boca Juniors, he suggested. (And so I did, sitting down with Boca presidential candidate Mauricio Macri, who would go on to win that election and later became one of the country’s rising political stars.)

While I was in Buenos Aires, I also researched topics that hurt the development of the clubs’ democratic political culture: the fan violence that plagues the sport and influences club elections; the corruption of club officials; and the shortage of women involved in the clubs. It was by far the most rewarding experience of my years as a student. Not that there weren’t difficult moments. My apartment got robbed in Buenos Aires, and the university denied my request for funding to attend the Boca Juniors elections that December. (That old prejudice: One of my professors, who was on the funding committee, said they viewed my application as “someone who wanted to go watch soccer games over winter break.” Facepalm.)

In the end, though, everything came together. My thesis—Playing the Political Game: Soccer Clubs in Argentine Civil Society—won the prizes of the politics and Latin American Studies departments. Forment, the adviser who believed in the project from the start, started doing his own research on the topic. And I learned that I wanted to write about sports and soccer for a living if possible. The experience showed me that not only could academics and sports co-exist, but so could academics and journalism. What I was doing in Argentina was just as much one as the other. And yet part of me still wonders: Is there still a bias against sports in the academic world?