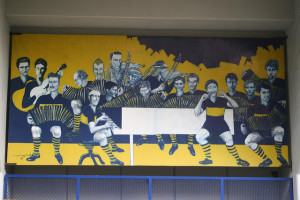 Shortly after Peter and I proposed this panel on collaboration between journalists and academics, I was contacted by a team of four young sports journalists interested in my dissertation topic. They all graduated with degrees in sports journalism, but haven’t found opportunities in investigative reporting. When we sat down for coffee, they shared a documentary they produced about horse racing in Buenos Aires that also examined the sport’s history and how it related to gender and class. While brainstorming their next documentary, they became interested in Boca Juniors’ failed attempt to build a massive stadium and sports complex in the 1960s.

The Ciudad Deportiva, or Sports City, was built on artificial islands spanning thirty city blocks in the Río de la Plata. The plans featured the region’s largest soccer stadium, a drive-in movie theatre, a fish-shaped aquarium, eighteen tennis courts, and tower with a rotating restaurant. Unfortunately for Boca Juniors, city and state officials, and the nearly 200,000 Argentines who bought raffle tickets to finance the project, rising construction costs and political in-fighting at the club doomed the project when all but the stadium was built. Boca eventually sold the property to a Soros-backed real estate development firm in 1991. Today the vacant lot sits next to a shantytown and one of the city’s most expensive districts, juxtaposing the city’s uneven development produced by neoliberalism.

The story of the Ciudad Deportiva resurfaces every few years as plans to redevelop the property are proposed without success in the city legislature. Surprisingly, no history of the project exists and journalists provide few details on how and why a project with a relatively recent history failed. Searching for clues, the team of journalists who contacted me heard about my research through a mutual journalist friend and were delighted to find I had spent nearly two years of fieldwork studying the Ciudad Deportiva. Though still in the early stages of pre-production, we have decided to produce a documentary together. In the short time we have collaborated, I have learned a great deal about how journalists and academics can work together.

First, we had to agree that rigorous investigation and wide diffusion were our primary goals. Neither the team nor I are seeking to turn a profit on the documentary, making it easy for me to sell the idea that we release it under a creative commons license. Working under a CC license frees us to focus on disseminating a story backed by sustained research with the shared benefit of exposure and production experience.

Second, the knowledge transfer of my research so far has been made far easier by Zotero, software that allows users to collect, organize, and cite sources. I had shared sources with fellow academics through Zotero before, so the documentary team has benefitted greatly from the meticulous digitization and organization I invested time in since starting fieldwork in 2010. While the neatly organized PDFs and notes are the crystallization of tedious labor on my part, I also counted on the generosity of other academics, journalists, club officials, and fans to digitize these sources in the first place. There is little danger here in being ‘scooped’, as I have already shaped an online identity around my research topic.

I had to reorganize my research library in Zotero for a new group library organized around the specific questions and goals of the documentary. These questions and goals are different from that of my dissertation, which aims to contribute toward a scholarly conversation on several historiographies including those discussing modern Argentine politics and economics, urban history, and soccer’s multi-faceted impact on society. For example, I had my work organized by archive, a mark of my discipline and collaboration with other historians working on soccer in Argentina. For the documentary it made more sense to separate sources into folders of ‘press’, ‘legislative’, ‘interview’, and ‘club document’ sources.

My collaborators will spend the next month during pre-production working with me in the archives and conducting interviews. Their perspectives as local sports journalists lend a new dimension to my work and analysis, while allowing them to immerse themselves in the sources that are shaping our documentary’s narrative. The documentary is also forcing me to synthesize analysis on sources for the purpose of sharing it with my journalist collaborators in a timely fashion, a healthy challenge I think from the longer timelines social scientists and humanists are used to. Surely more challenges await us as a team, but we are motivated by a shared interest in telling a story that reveals the impact the Ciudad Deportiva had on Buenos Aires.

2 thoughts to “Producing a collaborative documentary during fieldwork”